Storytelling: The Art of Communicating Health

Collecting and analyzing public health data is critical for tracking our Nation’s health.

However, the general public is not likely to share our love for numbers, charts, and graphs. As impressive as certain statistics may sound, they fail to put the issue into context and are quickly forgotten. For example:

No doubt, these are powerful statistics. But what do they mean to your audience?

As someone with a strong academic and journalism background, I’m hardwired to stress data and statistics in my writing. Data are necessary, of course, to establish credibility for your proposition or argument. Credibility is important, but data alone won’t resonate with your audience. If the message doesn’t resonate, you won’t see any change in behavior.

“No one ever marched on Washington because of a pie chart.” – Andy Goodman, Storytelling as a Best Practice.

So, what does resonate?

Presenting and explaining a public health issue within the framework of storytelling gives the audience the context they need to understand the issue and see the big picture—including the causes, consequences, and opportunities for change. Stories put a face on an issue, eliciting an emotional response from the audience. Whether it is empathy, anger, or happiness, emotions increase the salience of an issue, make it more memorable, and provoke action or behavior change.

This Is Bill. He Has Diabetes.

At a session on storytelling during the Centers for Disease Control and Prevention’s (CDC’s) 2012 National Conference on Health Communication, Marketing, and Media, I learned about Bill. Bill’s health has been adversely affected by the changing socioeconomic environment of St. Louis, Missouri.

Act3, the firm that developed “This Is Bill,” employed several storytelling techniques that make the issue of diabetes in St. Louis palpable:

Another great example of storytelling is CDC’s use of personal narratives in its Tips From Former Smokers campaign. You can watch, read, or listen to stories from 14 former smokers who are living with smoking-related diseases and disabilities. The participants—who represent a wide cross-section of ages and ethnicities—explain how smoking led to excruciating consequences, such as the amputation of limbs, removal of lungs, heart attack, stroke, asthma, and debilitating cancer treatments. They are open, honest, and blunt.

And, their stories are emotional. Roosevelt talks about how heart damage he suffered from smoking prohibits him from playing with his children. Beatrice reads the letter her 11-year-old son wrote to her about her smoking. These scenarios bring on the emotional response that creates a powerful anti-smoking message.

How powerful? Between March 19 and June 10, 2012, the number of weekly calls to the quitline promoted in the campaign (1-800-QUIT-NOW) increased 132%, and the number of unique visitors to Smokefree.gov increased 428%. According to CDC, “These results indicate that many smokers […] will respond to motivational messages that include an offer of help.”

“Stories Are Facts With Souls” 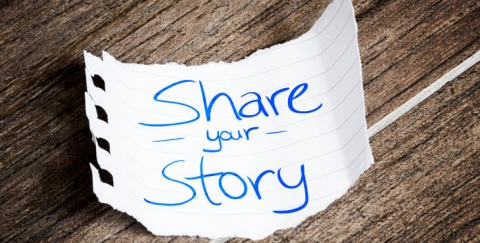 Suzanne Gaulocher, another presenter in the storytelling session, said, “Stories are facts with souls.” This gets to the essence of why stories are so important in our society and how powerful they can be in public health. Stories enable us to engage with new knowledge and broader perspectives, because we encounter them in the familiar territory of human experience.

Bill didn’t just teach me about diabetes. He demonstrated to me the power of storytelling. As a writer, the story of this story resonated with me. He inspired me to rethink how I frame public health communications.

How can this new perspective improve your work in public health? What stories inspire you?